If you’ve read some of our posts on customization, you’re likely aware that not every potential client brings simple requests to their meeting with an ICI Homes designer.

It’s not always as straightforward as, “Can we extend the garage wall by two feet in order to install overhead storage cabinets?” 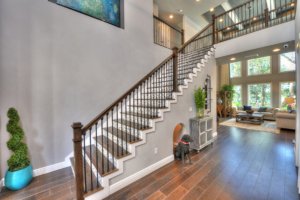 But do we love a challenge? We do! Read on for proof that there’s nothing we can’t customize.

Yes, we can build on your lot*

That asterisk is there for a reason. And we absolutely can build on your lot. It’s another helpful option for buyers who want a custom home, but not in one of our communities. Click for the skinny on how we can help with that.

Our Custom Home Division President, Don Wilford — ICI Homes’ own “Chief Customizer” — wants those of you interested in this option to be aware of some dos and don’ts.

Per Wilford, the relationship between builder and buyer is easier when it involves one of our communities. Potential clients who own their lots often get confused when choosing a builder. It’s rarely an easy, linear decision.

“It’s a natural instinct for them to go to several different builders,” Wilford says of soliciting floorplans and quotes.

Instead, our “Chief Customizer” suggests you select one design-builder. Be sure they’ll build for your budget and hold them fully accountable. Work as a team to build your home. Also, if you own your lot and submit floorplans from other sources to an ICI Homes designer, they’ll politely decline to build them.

“If I draw a plan, that’s my plan,” Wilford says of the example. “You can’t take that to another builder.”

How do you circumvent intellectual-property road block? By using it as inspiration rather than verbatim. Wilford says he won’t use another person’s floorplan or copy it. But he will ask the on-your-lot client what they like best about those other plans.

We customize at every price point

Wilford can’t double the size of your lot or floorplan, but there are many other budget-friendly solutions.

“They want a little bigger back porch,” he says. “They want their garage to be bigger. Maybe someone just got out of the military and they need a place for ‘stuff.’ We can move the garage forward four feet. That’s huge for a young couple for storage.”

Perhaps the best real-life example of what we can do customization-wise is Tamaya, our master-planned community in metro Jacksonville.

“There are over 300 homes and every elevation is different,” Wilford says. “There’s not the same house side-by-side anywhere in there. We like to promote individuality. When you customize, we have people that live in communities of 1,000 people and say, ‘I’ve got the only one in here.’ And they do.”

Ready for your customized home? Talk to ICI Homes here.